The store will not work correctly in the case when cookies are disabled.

The recognized German technical approval (Z‑14.4‑591) for Huck® Bobtail lockbolts covering diameters M12-M36 has been extended by Germanys highest building authority DIBt (public-law institution) for a further five years. In addition, the newest approval version includes some important changes for the fatigue verifications for oscillating loads under axial and eccentric loads, so the higher fatigue strength can now be applied regardless of the diameter of the fastener. This represents a major advantage compared to high-strength structural bolting assemblies for preloading according to EN 14399, which are widely used in steel construction.

For construction, products that fall within the scope of a harmonized European standard (hEN), the manufacturer is obliged by the Construction Products Regulation (Regulation (EU) No. 305/2011) to create a declaration of performance and affix the CE marking. As lockbolts are not covered by a hEN, product performance can be assessed using an ETA (European Technical Assessment), which is valid throughout the EU and recognized worldwide. While the application for a lockbolt ETA is pending, Howmet Fastening Systems has applied at the DIBt for the extension of the general technical approval and construction technique permit Z-14.4-591 for a further five years. As part of the extension, the latest research findings were also considered and included in the new version of the approval. This essentially concerns the design rules for fatigue strength and eccentrically loaded lockbolts, which are greatly improved.

The extension of Z-14.4-591 allows for Bobtail lockbolts to be used in areas regulated by the building authorities as a replacement for non-preloaded structural bolting assemblies acc. to EN 15048 or high-strength structural bolting assemblies for preloading acc. to EN 14399. This national technical approval / construction technique permit contains all the necessary parameters for the dimensioning and execution of Bobtail lockbolt joints in steel construction applications for category A-E connections. However, the characteristic values published in Z-14.4-591 can also be used in other areas of application, such as rail, commercial vehicles, lattice towers or wind turbines.

The extent to which the regulations can be applied outside of Germany or in other areas of application must be clarified on a case-by-case basis with the regulatory authority or a certifier in the country in which the construction is to be undertaken.

Verification of the static load-bearing capacity

Although correctly-installed Bobtail lockbolts always have full preload, the static load-bearing capacity of shear and tension connections can be verified using the DIN EN 1993‑1‑8:2010‑12 calculation rules in conjunction with the National Annex DIN EN 1993‑1‑8/NA:2020‑11 (for all Categories A-E, see Table 1). Calculation rules that deviate from the standard are specified in the approval.

The Bobtail lockbolts included in the approval consist of a steel pin in strength grade 10.9 combined with a matching collar. They are available in metric sizes M12 through M36 and imperial sizes 3/4'' and 1''. Smaller diameter BobTail Lockbolts are not included in the study.

Table 2 summarizes the mechanical characteristics, which were determined and confirmed through an extensive 3rd party test program, for dimensioning the connections with Bobtail lockbolts of diameter M12-M36.

The verification of the fatigue strength in steel construction is regulated in the EN 1993-1-9:2005 + AC:2009. It was therefore the aim of the approval process to provide proof of fatigue for Bobtail lockbolts in accordance with the applicable standard. The verification of fatigue strength is becoming increasingly important nowadays against the background of lightweight construction requirements and the inflation of steel prices. Bobtail lockbolts have significantly better fatigue strength than threaded fasteners due to their special groove geometry. As a result, structures can be designed more efficiently, and material costs can be saved.

Fatigue strength studies on the Bobtail lockbolts go back more than 10 years and were carried out in the test laboratories of recognized Fraunhofer-Institute IGP, Rostock and University of Applied Sciences, Wismar, Germany. A total of several hundred (~300) individual tests were carried out to DIN 969. All test results were evaluated by an independent expert to align the results with DIN EN 1993‑1‑9:2010-12 and acknowledged by the DIBt.

Continuous development of the lockbolt design and improvement of manufacturing processes ensure the high fatigue performance of the Bobtail. The recent testing undertaken for the permit confirm the class-leading fatigue strength of the Bobtail lockbolt system. A typical test setup for axial fatigue testing in accordance with DIN 969 is shown in Figure 1. 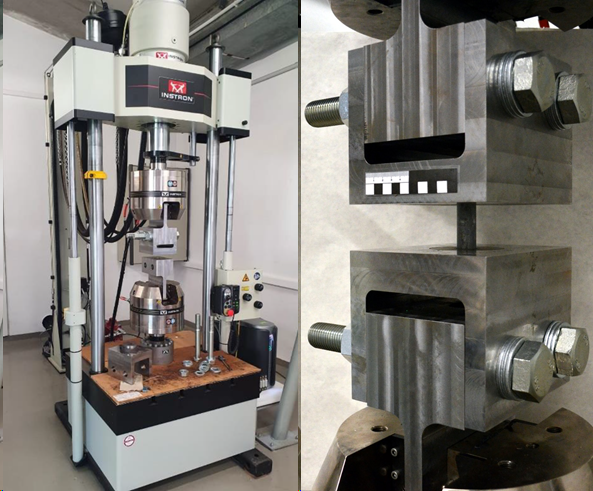 The additional testing, combined with information gained from participation in publicly funded research projects, mean the notch category for Bobtails could be raised consistently to 71 for all diameters from M12 to M36 (see Table 3). The only exception are those with surface coatings J68 and G2, which have slightly lower fatigue strength due to the coating process. Based on the test results, the fatigue strength is limited to notch case 63, which is still well above HV-sets. 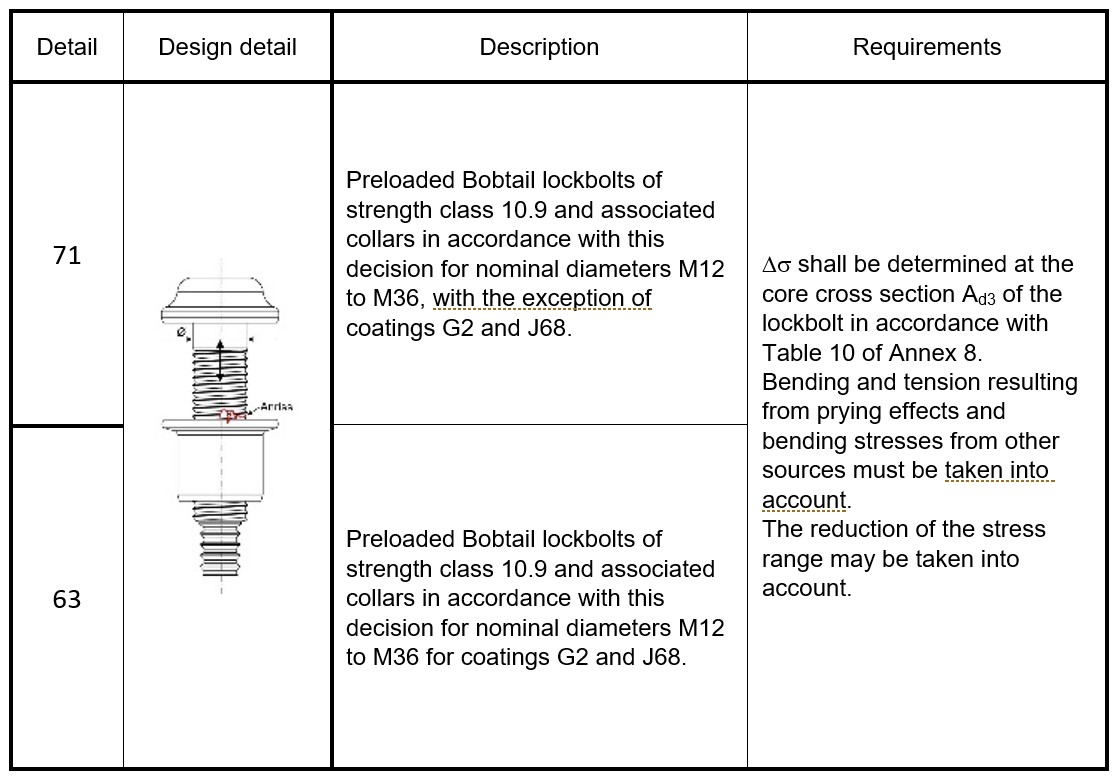 According to EN 1993-1-9 a notch case (detail category) of 50 applies to all threaded bolts and corresponds to an endurable direct stress range  of 50 N/mm² with 2 million load changes. A comparison of notch group 71 to notch group 50 reveals, that the tolerable direct stress range  of Bobtail lockbolts can be more than 40 % higher (71 N/mm² compared to of 50 N/mm² at 2 million load cycles) to reach the same number of cycles. Or in other words, a Bobtail lockbolt loaded with the same stress (single-stage load spectrum) at least three times as long as a conventional threaded fastener, depending on the actual direct stress range and therefore the resulting slope of the Wöhler curve (see Table 4 combined with Figure 2).

In addition, the new version of the approval contains updated regulations for the verification of ring flange connections both in terms of the DIBt-Guideline for Wind Turbines (2015-03) and DIN 18088‑3:2019‑01. The approval also points out that for slip-resistant shear connections the regulations of DIN 18088‑3:2019‑01 and IEC 61400-6:2020 can be applied analogously to connections with Bobtail lockbolts. All verification procedures and further information on the use of Bobtail lockbolts can be found in the approval. 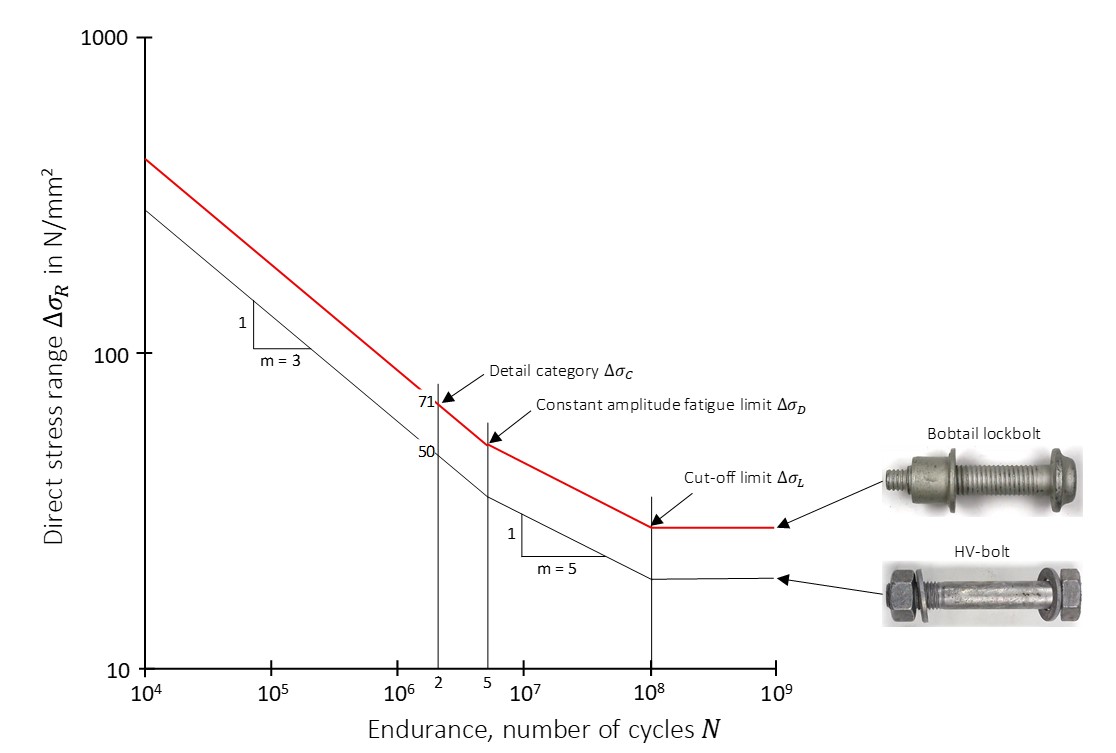 The present approval gives Bobtail lockbolts the verification of static load-bearing capacity and fatigue strength in the context of Eurocode 3 for applications in construction.

The rules for design and execution enable structural engineers to take advantage of the lockbolt technology in steel construction. In addition to the load-bearing capacities, which are superior to that of a threaded bolt, there are other advantages, such as the low scatter when applying the preload force, the non-detachable connection and the high vibration resistance and fatigue strength. Bobtail lockbolts are also characterized by the fact that they are mechanically maintenance-free (no re-tightening required) and are easy, quick, and quiet to process. Due to special bumps on the collar, a visual inspection can be made after installation to determine correct installation.

However, the present approval can also serve as a basis for dimensioning joints with Bobtail lockbolts in other industrial applications.

Did you find what you were looking for?

We hope that you found what you're looking for. If you need any further help or information, please complete the form and we'll get back to you as soon as we can.