The store will not work correctly in the case when cookies are disabled.

In the fastening world, clamp is the end game

Consistent clamp is the ultimate goal to maintain structural integrity. Without it, you risk bolt failure.

When the same torque is applied to standard nuts and bolts, there is a wide range clamp force among each fastener. The tightest bolt can end up carrying the load of 4 or 5 bolts, causing it to fail from fatigue strength. This puts even more tensile force on fewer bolts.

HuckBolts are applied with direct tension to provide consistent clamp from each fastener. Again and again. Time after time.

In a series of bench tests on a variety of conventional nuts and bolts, scientists found that, even when torque is consistent, clamp is not. Friction that can be caused by dust, heat, inconsistent manufacturing, and other invisible elements causes inconsistent clamp.

Watch the Skidmore-Wilhelm tests to see how HuckBolts deliver consistent clamp every time.

Which bolt will fail first?

Consistent torque does not deliver consistent clamp
Varying friction factors in the threads cause inconsistent clamp in evenly torqued-on nuts and bolts. Bolt #3 in the diagram above will fail sooner because it has a higher clamp than the other evenly torqued bolts, creating more tensile force on that one bolt. HuckBolts, however, use direct-tension to deliver consistent clamp with less than 5% range from each lockbolt, spreading the tensile load evenly between the lockbolts and providing stronger, fatigue-resistant joining power every time.

The torque-tension relationship
Huck BobTail® lockbolts are not subjected to torsion during installation, so they can safely be taken to higher preload values than conventional bolts, which are subjected to a combination of tension and torsion forces during installation. The torsional forces from friction and geometric factors between the mating threads result in a reduction of yield and tensile strength of 10% to 20% compared to same-size BobTail fasteners. 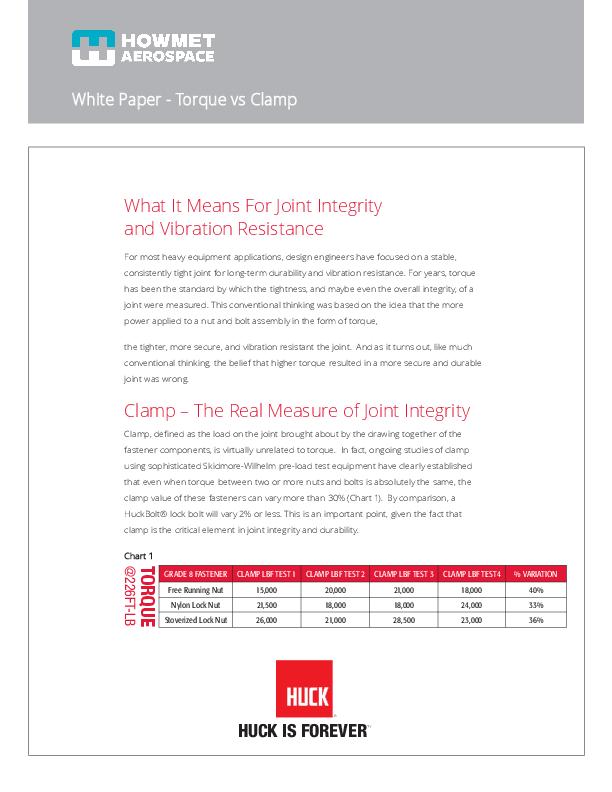 Get in Touch with one of our Experts

Did you find what you were looking for?

We hope that you found what you're looking for. If you need any further help or information, please complete the form and we'll get back to you as soon as we can.