The 4002 series is the original series that is used mostly within the aerospace industry. It is a reliable, captive, vibration resistant quarter turn system that has a long life-cycle and can sustain high tension loads. Many varieties are available. In the 4002 series, there are steel and stainless steel studs available with various surface treatments. Some of the surface treatments are typically made for aerospace, such as cadmium plated and yellow chromate.

For studs with each dash length there are corresponding spring cups with the appropriate length making the stud captive after installation. These studs have to be installed with the 4P3 installation pliers. Longer studs with dash numbers from 16 and above use a short spring cup so a retaining ring was required to get the captivity feature.

The D4002 series was developed to offer a cost effective alternative for industrial applications with better availability for smaller quantities. The material and surface options were reduced and adopted to European ROHS and REACH requirements. In addition to the stainless steel stud there is also the zinc plated steel stud, both ROHS compliant. 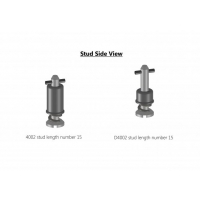 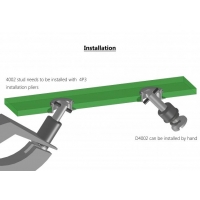 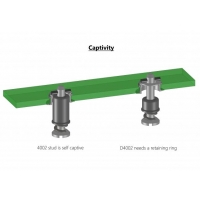 Please add your details to sign-up for our newsletter.